Timo Sarpaneva (1926–2006) is best known for his designs of glassware and art objects. Originally trained as a graphic designer, Timo Sarpaneva’s work included the famous Iittala i-logo from 1956. Together with Tapio Wirkkala and Kaj Franck, Sarpaneva helped establish the international fame of Finnish design.

Timo Sarpaneva’s versatile, inquisitive and open-minded creative spirit led him also to work with metal, ceramics and textiles. In this exhibition, Sarpaneva’s classic designs appear together with his rarely seen sculptural and spatial works that have been in storage for many years. The rarer works include Pack Ice, consisting of 485 glass parts and made by Sarpaneva together with glassblowers of the Iittala glassworks. 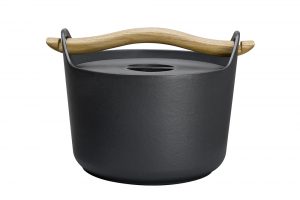 The recorded interviews featured in the exhibition present the artist and designer’s own voice and ideas, as Sarpaneva describes his own profession and works. A completely new perspective on the life and work of Timo Sarpaneva is provided by video recordings made by his wife Marjatta Sarpaneva in the 1990s and 2000s.

The exhibition is curated by Harry Kivilinna, curator at Design Museum, with exhibition architecture by Ilkka Suppanen. The films shown in the exhibition are edited by Professor Anne Lakanen.