The North – Finnish Design and Lapland

The North – Finnish Design and Lapland has opened in the Changing Room in Design Museum’s collections exhibition Utopia Now – The Story of Finnish Design. This new exhibition asks what kind of relationship Finnish design has with the North, with Lapland and Sámi culture.

Located on the northern edge of Europe, Finland is known for its original culture, beautiful natural environment and interesting design. What is now understood as Finnish design, however, has been produced in the centres of industry and commerce in Southern Finland.

The rugged natural conditions of Lapland and the local heritage of crafts have inspired designers. – Images of Sámi people, fjelds and reindeer can be seen in products created by artists and designers from South Finland, which are often related in some way to tourism. Lapland, both real and imagined, has served as an exotic setting for advertising photography, note Curator Harry Kivilinna, Educational Curator Leena Svinhufvud and Curator Susanna Thiel of Design Museum.

The exhibition is based on Design Museum’s own collection. It was noticed during the research process that there are relatively few objects in the collection that refer to Lapland. There are only a few ‘authentic’ artefacts of the Sámi culture, the museum’s experts also point out.  A special item among the exhibits is a so-called Lapp ring of silver donated by Count Carl Mannerheim, which was acquired for the present museum collection already in 1881. The exhibits also include the OXXO printed fabric designed by Seija Ranttila for the Finlayson company, the Lappi (Lapland) wall-mounted plates (1948) by Anja Juurikkala, the Poro (Reindeer) wall hanging (1904) by Väinö Blomstedt, the Lapin lauma (Lapland Herd) coffee cosy (1949), and the Ruija raanu rug by Elsa Montell-Saanio.

Designers tell of their relationship with Lapland
Some of the designers featured in the exhibition have had a particularly close relationship with the North. Tapio Wirkkala spent the summers with his family working in his house in the wilderness in Inari in Lapland. Kaj Franck made Sámi material culture with its basis in specific needs as a model for contemporary design and was involved in reviving crafts livelihoods in Lapland. 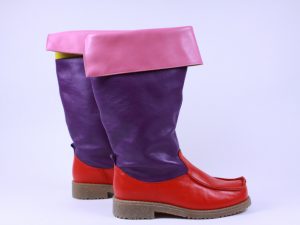 The younger generation of designers is represented in the exhibition by Noora Niinikoski of Marimekko and Lapikkaat (Lapp Boots, 2010) designed by her for Marimekko. Niinikoski describes her own relationship with Lapland as follows:

I had an intensive period of folklore inspiration in the early 2000s. I had returned to Finland after studying in London and I suddenly discovered in folklore something that I didn’t know even existed. The real Lapp boots are astounding. I have visited Rovaniemi in the summer, but I have no personal experience of Lapland. For me, Lapland is something of an imaginary place, because I haven’t been there. I imagine what it could be like there.

The exhibition will be on display at Design Museum until 28 January, 2018.