’What do the most widely awarded and most interesting contributions to present-day graphic design have in common? They all use Schick Toikka fonts.’ This was noted by the jury of the Graphic Designer of the Year Award when choosing the Schick Toikka type foundry and design studio as the recipient of the award for 2020. The exhibition at Design Museum presents a wide range of the designer duo’s user fonts and art projects, as well as custom typefaces for international corporations such as Nike.

Schick Toikka’s clientele include the Flow Festival, The  New York Times, Sennheiser, Nike and Vogue. In addition to work for important clients, Schick Toikka have also collaborated with leading names such as designer Mirko Borsche and artist Nora Turato. 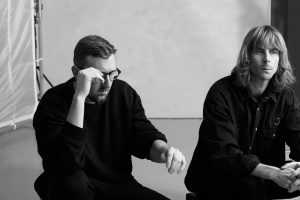 Lauri Toikka (born 1984) and Florian Schick (born 1982) cooperate closely, although they are rarely in the same country. They met in 2009 while studying in The Hague in Holland. They first established their type foundry and design studio in Berlin in 2010. Lauri Toikka later moved to Helsinki, while Florian Schick still lives in Berlin.