On show for a week at Design Museum shows an exhibition of the multifaceted work of Lotta Nieminen, who has received the Graphic Designer of the Year award of 2019 of the Grafia Association of Visual Communication Designers in Finland. Graphic designer, art director and illustrator Lotta Nieminen has pursued an impressive international career in New York for several years. The exhibition will include events for the public.

Lotta Nieminen (born 1986) is one of the most successful creative Finnish designers on the international scene. She has received many prizes and distinctions, and has been included on the Forbes Under 30 list. As a graphic designer, art director and illustrator, she is a professional of broad scope, whose repertoire as a creative partner extends from branding and visual identities to publications and digital applications.

Following studies at Aalto University and the Rhode Island School of Design, Lotta Nieminen founded her own design studio in New York in 2012. Agent Pekka of Finland represents Nieminen in her work as an illustrator. She works with numerous companies in the fashion, media and lifestyle sectors and her clientele include, among others, Bvlgari, Hermès, Google, Facebook, The New York Times and  Marimekko. Lotta Nieminen is particularly known for her colourful illustrations with their tangible and still-life feel.

The exhibition features her most important work from over the past few years.

‘A new format liberates me for a while to work in a slightly more intuitive and playful way. Regardless of format, however, I am interested in colour, proportion and composition’, says Lotta Nieminen.

Closing event:
Sunday 24 March.
2 p.m. to 4 p.m. : Workshop
4 p.m. to 6 p.m.: Lotta Nieminen will meet with the public at the exhibition.
Admission with the museum ticket or the Museum Card.

In co-operation with: The Grafia Association 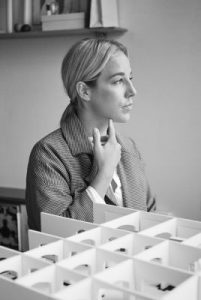 Please note. Free admission to the exhibition for members of the Grafia association.