A Path of One's Own

Kaisa and Christoffer Leka, who were granted the award of Graphic Designer of the Year, turn their visual world into reality. You can now experience it in Design Museum’s Gallery!

A Path of One’s Own is a spatial illustration of the works by Kaisa and Christoffer Leka, an exhibition that turns into a work of art of its own. The exhibition invites guests to join in the unique stories by the Lekas, exploring the duo’s original design approach in which all their work is rooted.

Before this, the designers’ visual world has awaited discovery in their award-winning self-published works. Their works have often been inspired by their travels and feature the adventures of their alter egos, Mrs Mouse and Mr Duck. This time, the Mouse and Duck have escaped from the pages of the books and roam free in the exhibition. In A Path of One’s Own, Kaisa the Mouse and Leka the Duck can share their thoughts in discussion surrounded by their own visual world.

Conversation between Kaisa the Mouse and Leka the Duck about the exhibition and its message:

“We are now supposed to write a statement of some kind.”
“A statement?”
“Yes, a statement! Like a declaration or something.”
“About what?”
“Our exhibition, of course, you fool!”
“Well, let’s say that it is a really good exhibition.”
“No, you can’t say that. You have to say something fancy and quote Walter Benjamin!”
“Well, let’s say that Walter Benjamin thinks the exhibition is really good!”
“No, you can’t say that either. Maybe he wouldn’t think much of it.”
“In that case he would be the dumbest critic in the world!”
“That could be true. But we still have to say something. About the exhibition, I mean.”
“Well, let’s say that our exhibition is the best exhibition ever, because it has the most Mouse and Duck stuff ever.”
“That’s true, yes.”
“And a lot of other stuff. Like the outboard. And the bed. And the typewriter. And a lot of flags!”
“Don’t forget the bicycle and the mailbox!”
“Yes, and the telephone! Maybe it doesn’t work, but it’s there.”
“Great! What if we wrote: Kaisa and Christoffer Leka, who were granted the Graphic Designer of the Year award, invite museum guests to explore their world in a never-before-seen way. In this exhibition, the guests can learn about the works and working process of the truly original artist duo, and become absorbed in an alternative reality where the walls are wide and the ceiling high.”
“That is starting to sound like something. I was just thinking… The ceiling at the museum is not that high and the hallways down in the basement are very narrow.”
“I was talking metaphorically! That’s what you are supposed to do when you talk about art.”
“Okay…? But you really should say it is the best exhibition ever!”
“OK, we will say that.”
“Great! Can I go out now?” 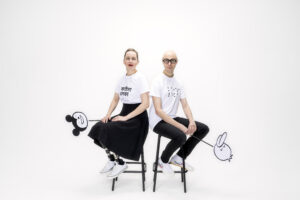 Kaisa and Christoffer Leka are diversified and independent creators and teachers in the field of visual communications. The Graphic Designer of the Year committee wished to present the award to them for their work as teachers of graphic design in particular, but also for their long-term work on their multiple award-winning self-published books.

Grafia, the Association of Visual Communication Designers in Finland, hopes the annual Graphic Designer of the Year award will improve the standard and promote appreciation of visual design. The award exhibition is organized in co-operation with Grafia and funded by the copyright organization Kopiosto.

The exhibition is co-produced with Grafia and sponsored by Pelago and Hagelstam & Co.