What does augmented reality have to do with playing in a sandbox?

California comes to Helsinki in November when the exhibition California: Designing Freedom will open at Design Museum on 10 November. On display in connection with the exhibition will be an augmented reality (AR) sandbox developed at Aalto University.

The original AR sandbox was developed in 2015 at the UC Davis University in California. It was designed to let users create topographic models with sand. When sand is shaped, a movement-sensor camera records its pits and protuberances changing the produced image accordingly. Rain and flowing water can also be projected into the landscape of the sandbox.

The Finnish AR sandbox was constructed on the basis of the open source code of its Californian cousin. Unlike the American example, however, the Finnish version is explicitly designed for small children. It can be used for studying the opportunities of augmented reality in different pedagogical environments.

The sandbox in Design Museum’s California exhibition permits children to study the digital world through touch and corporeal experience. The sand of the sandbox can be used for painting by digging pits and piling hills. In addition, various kinds of soundscapes can be created with the sandbox. 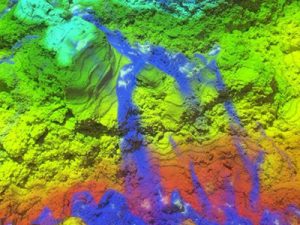 Picture by Jaana Brinck: Testing of the AR-sandbox +Andscape

The AR-sandbox will be on display at the museum from the 10th of November.