"A massive picnic in the desert"Anssi Laurilas Burning Man experiences

By Finnish standards, Anssi Laurila is a bona fide veteran of the Burning Man desert festivals, having attended five of these week-long events in the United States. He has spent seven weeks of his life in the Nevada desert.

Anssi Laurila says that the unique atmosphere of the festival has attracted him to the desert from one year to another.

‘People of completely different backgrounds assemble in the same place in the dust for a week. Despite their backgrounds, they all have the same goal –  to come together to learn something new and to express themselves,’ Laurila points out.

The festival is about celebrating, but also many other things. According to Laurila, the most important things are the communities, freedom and mad creativity fostered by this event.

‘The best thing about this festival is that you can actually realise all kinds of ideas. One year at the festival, I was looking up into the sky where the International Space Station was flying past and I  got the crazy idea of a place where we could be in contact with the people on the space station during the festival.’

The Cosmic Egg is born

After Laurila returned to Finland, his idea expanded and was developed further. The idea and practical implementation of the Cosmic Egg was studied with a group of people. Everybody had a different kind of expertise. For example there were movie makers, engineers, architects, game designers, PR-specialists and a magigian in the team.

‘It was an astounding achievement to complete the project. The logistics alone, moving the structure from a Finnish forest to the other side of the Atlantic and assembling it in the desert required immense effort. The exceptional thing about Burning Man is that the experience was not limited to the week of the event,’ Laurila explains.

‘Before the event we had worked for months on the project that was to be taken there. It is this feeling of community that makes the experience exceptional,’ says Laurila.

As in the case of the Cosmic Egg, the festival is known as a testing platform for new technologies and ideas. Although Burning Man is a strictly non-commercial event, experiments have been devised, developed and innovated there over the years that have led later to commercial applications.

Anssi Laurila’s tips for surviving the Burning Man festival:
(Also applicable to other areas of life)

Keep an open mind, participate and let yourself go.
Instead of a self-centred experience, try to think of how you, in particular, could make the festival a better experience for other people.
Remember to take care of yourself. Hydration and sunblock are important to bear in mind in the desert.
Prepare for physical and mental strain.

Anssi Laurila studied at Aalto University’s Design Factory in Otaniemi. Now works as a producer in Shlush.
Coordinator of the Burning Man Finnish community.
Five-time participant of the Burning Man festival. In recent years, Laurila has also been involved in exporting Finnish art, research and development projects to the event.

Burning Man is a week-long festival held at the turn of August and September in the Black Rock Desert in Nevada, USA. The high point is the evening of the last day, when a wooden effigy is burnt. Other works constructed for the festival can also be burnt on the pyre on the last night.
The festival is a non-commercial event of an interdisciplinary artistic and scientific nature where anyone can be anything.
The festival underlines the themes of community and freedom. 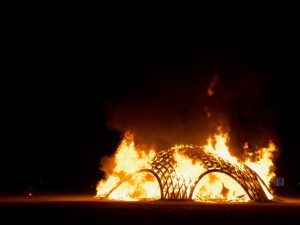